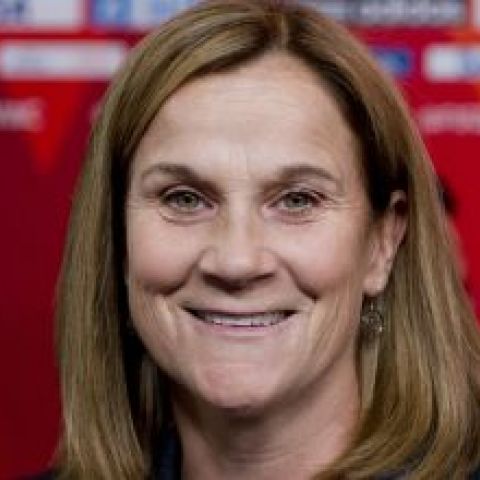 Jill Ellis was named Head Coach of the U.S. Women’s National Team in 2014. Since then, she has won two Women's World Cups, in 2015 and 2019. The victory in 2019 shattered records, making her the first coach to win the Women's World Cup twice. The only other coach to have won two World Cup titles is Vittorio Pozzo, winning for Italy in 1934 and 1938.

She joined the full Women’s National Team staff in January of 2008 after leaving her post with the U.S. U-20s, which she had led the since the start of 2007.

Ellis has also had two stints as the head coach of the U.S. Under-21 Women’s National Team, the second starting in the middle of 2005, after which she guided the team to the Nordic Cup in Sweden. She also coached the U-21s to the Nordic Cup title in Germany in 2000. Ellis was also a scout for the USA at the 2000 Olympics in Sydney, Australia, and has served as an assistant coach with the U.S. U-21s and U.S. U-16 Girls’ National Teams.

Ellis joined U.S. Soccer full-time after a highly successful 12-year run as the head women’s soccer coach for the UCLA Bruins. Ellis led UCLA to eight NCAA Final Fours, including seven in a row from 2003-2009, and won six straight conference titles from 2003-2008. She finished her time in Westwood with a record of 229-45-14. Ellis, who was also head coach at the University of Illinois, has an all-time collegiate coaching record of 248-63-14.

She was the 2000 NSCAA National Coach of the Year after leading the Bruins to the NCAA Final in just her second season as head coach.

Ellis arrived in Westwood after heading the University of Illinois women’s soccer program for two years. In 1998, she brought the Fighting Illini to a 12-8 record and a first-ever Big-Ten Tournament berth. Prior to coaching at Illinois, Ellis served as an assistant coach at the University of Virginia for one year (1996-97), at Maryland for three years (1994-96) and at North Carolina State for another three years (1988-90). As an assistant coach at North Carolina State, Ellis helped the Wolfpack secure the 1988 ACC title and an NCAA Final Four appearance.

A forward during her playing days at the College of William & Mary from 1984-87, Ellis was a Third-Team All-American in 1987. In 1984, Ellis helped Braddock Road in Virginia to the Under-19 club national championship.

Ellis grew up in Portsmouth, England and came to the United States in 1981 at the age of 15. She also lived in Singapore for two years while her father helped to develop a national soccer program in that country. She earned her B.A. in English Literature and Composition from the College of William & Mary in 1988 and currently resides in Miami. She has a USSF “A” coaching license.