The objective of this study was to estimate the total volume of property taxes paid by U.S. hoteliers in 2016, as well as provide an estimate of total property taxes for each state. This research was funded by grant awarded from the American Hotel & Lodging Educational Foundation. (AHLEF) 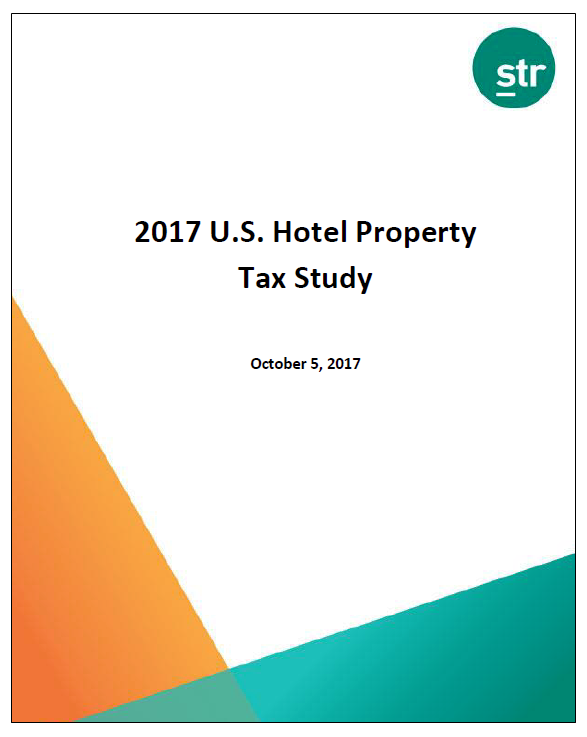 Methodology
In order to estimate the volume of hotel property taxes paid for each state in the United States, STR utilized its database of rooms revenues data from over 30,000 hotels, broken down by market. Rooms revenues from the remaining hotels within each market were estimated using modeled data based on the performance of hotels in that same market and class.
Property Taxes were then estimated using HOST P&L data for 2014, 2015, and 2016. STR collected HOST P&L data for over 5,000 hotels each of these three years. This data includes actual real estate tax expense, personal property taxes, and other property tax expense.

This analysis assumes that all hotels in each state are paying full property taxes based on local property tax assessments. While some hotels may receive tax incentives and do not pay any property taxes or only a partial amount, we are unable to determine or estimate the number of hotels that have these tax incentive agreements in place.

Property Taxes Defined
Property taxes collected in the HOST P&L program include real estate taxes, personal property taxes, and other property taxes. The HOST program uses the Uniformed System of Accounts for the Lodging Industry (USALI) as a basis of data collection. Data submissions are provided and accounted for by our third-party data providers. STR assumes this data is accounted and allocated properly as instructed by the USALI. The 11th edition USALI defines three types of property taxes as follows:

Study Findings
In this study, we estimated total property tax expense by both state and market. There are 164 STR-defined markets and 50 states, in addition to the District of Columbia. There are 53,406 hotels in the United States, whereby STR has performance data for approximately 32,000 of these hotels. Combining both actual and modeled rooms revenues for all 53,406 hotels, total rooms revenues for the entire U.S. were estimated to be $149 billion in 2016. Approximately 81 percent of all U.S. hotels are limited-service properties, while 19 percent are considered to be full-service. In terms of total rooms, there were over 5 million in 2016, where 63 percent were limited-service and 37 percent were full-service.