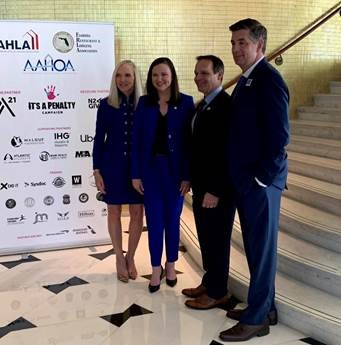 MIAMI (January 9, 2020) – The hotel industry convened today the National Football League, national and local Florida organizations and human trafficking prevention groups to kick off a month-long series of events to raise awareness about the scourge of human trafficking which affects 40 million people around the globe. In an effort to help spot and stop traffickers who exploit the travel and tourism industry, the American Hotel & Lodging Association (AHLA), in partnership with the Asian American Hotel Owners Association (AAHOA) and the Florida Restaurant & Lodging Association (FRLA), convened a half-day summit with key stakeholders which included a training of hotel employees

Joined by Attorney General Ashley Moody, lawmakers and leading experts, the event highlighted pivotal partnerships with law enforcement and effective tools that have been implemented to reduce the number of incidents of trafficking in hotels.

Due to an influx of visitors during large events such as the Super Bowl, increased instances of human trafficking can occur, which is why the hotel industry launched a pivotal campaign last year, No Room for Trafficking, with the goal of training every hotel employee to spot and stop trafficking. As part of this month’s awareness activities, AHLA is convening the broader travel community to help raise awareness around this critical issue.

The event featured a human trafficking prevention training session certifying at least 200 hotel employees and highlighted the launch of It’s a Penalty’s fifth global campaign, the third around the Super Bowl, to raise awareness among sports fans and the general public in an effort to educate about the signs and ways to report instances of trafficking. It’s a Penalty launched the campaign in coordination with event attendees A21, as well as the Super Bowl Host Committee, The Women’s Fund Miami-Dade, the Office of Miami-Dade State Attorney, Katherine Fernandez Rundle, the Miami Dolphins and the NFL, and in partnership with local, state and federal agencies including the U.S Attorney for the Southern District of Florida, HSI, FBI, federal and local trafficking task forces, and over 300 local community partner organizations.

“Human trafficking is a deplorable crime that damages and destroys millions of lives. Because of this, the hotel industry is committed to helping lead the way in bringing it to an end. Our goal is to ultimately have every hotel employee in the United States trained on how to spot and stop trafficking,” said Chip Rogers, president and CEO of AHLA. “We believe it is critical to convene our entire industry around a united approach to combat human trafficking and build partnerships with law enforcement officers and leaders in the prevention space, such as Attorney General Ashley Moody and leading prevention partners like It’s a Penalty and A21. While there is still much more to do, we believe our shared commitment to training and education will continue to make a difference.”

Already each year, thousands of hotel employees are trained on how to spot and stop trafficking. With the launch of AHLA’s No Room for Trafficking campaign and AAHOA's Human Trafficking Awareness Training, the hotel industry is continuing its strong record by convening the entire industry around the goal of training every hotel worker.

Attorney General Ashley Moody said, “Human trafficking dehumanizes victims and deteriorates our society. It is vital that we utilize partnerships across all levels of government and industry to end this atrocious crime. That is why I am proud to support Florida’s hotel industry and prevention partners ahead of Super Bowl LIV as we unite efforts around our shared goal of ending human trafficking. I strongly encourage all service industries to train their employees to spot and report these crimes. Working together we can end trafficking in Florida and build a stronger safer Florida.”

“We’re so proud to launch our Super Bowl campaign in Miami in partnership with hotel industry leaders, the Attorney General and Florida lawmakers. By harnessing the power of sport to prevent exploitation, we will comprehensively address trafficking by raising awareness, educating the public and training employees,” said Sarah de Carvalho, CEO It’s a Penalty Campaign.

“Florida’s hospitality industry is second to none and, therefore, is an incredibly vulnerable target for human trafficking,” said Carol Dover, President and CEO of the Florida Restaurant and Lodging Association. “We are committed to stopping this horrible crime, and we are proud of our efforts to equip our hospitality team members. Engaging and empowering those on the forefront to recognize and expose traffickers is essential to this fight. We will continue our efforts with local, state, and national partners to ensure safety throughout our industry.”

“A hotel’s front desk can be the first line of defense when it comes to saving lives and keeping human traffickers out of our communities. That’s why America’s hotel owners are committed partners in the fight against trafficking. Through education and awareness initiatives, we are working to ensure that every hotel owner and their employees are trained to identify and respond to instances of human trafficking,” said AAHOA President and CEO Cecil Staton.

“This campaign will shed light on the severity of this issue, both here in Florida and across the country, and will allow thousands to learn the signs of human trafficking.  We are proud to partner with the hotel industry here ahead of the Super Bowl in this critical effort,” said Mollie Thorsen, U.S. Director of Advocacy, A21.

Throughout National Human Trafficking Awareness Month, AHLA will continue efforts to raise public awareness and facilitate collaboration with policymakers, law enforcement and hoteliers on best practices for policies, procedures and training to enhance our human trafficking prevention efforts. January’s activities will be the first of many during this year’s No Room for Trafficking push. Looking further into 2020, AHLA will be highlighting the industry’s on-going efforts with targeted events across the country including Massachusetts, Arizona, Nevada, Delaware, California, Illinois, Rhode Island, Maryland, West Virginia and more. We will also be working with key states to advance legislation at the state level and continuing to provide our members and industry with on-going support and resources. We will continue to grow and enhance the industry’s efforts with partnerships and member engagement.

The American Hotel & Lodging Association (AHLA) is the sole national association representing all segments of the U.S. lodging industry and contributes nearly $660 billion to U.S. GDP. Headquartered in Washington, D.C., AHLA focuses on strategic advocacy, communications support and workforce development programs to move the industry forward. Every day, America’s hotels make dreams come true, not just for our guests, but also for the 8.3 million people whose jobs we support—more than 1 in every 25 American jobs. Learn more at www.ahla.com.